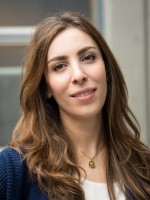 Narges Asadi is an affiliated researcher within quality and production system from ABB Robotics. Narges received her Ph.D. in the area of Innovation and Design as an industrial PhD candidate from Volvo Construction Equipment at Mälardalen University. She has worked as a research assistant at Product Realization Division at IDT since 2011 and has been a member of the INNOFACTURE Research School during 2012-2017. Her background includes several years of industry practice as an industrial engineer.